It’s taken 20 years, and an 11 percent increase in cases filed in 2020, for the WIPO Arbitration and Mediation Center to registered its 50,000th “cybersquatting” case, covering almost 91,000 domain names, and involving parties from over 180 countries, the organisation announced this week.

END_OF_DOCUMENT_TOKEN_TO_BE_REPLACED

WIPO have announced that as of 1 August they began providing domain name dispute resolution services for .CN and .ä¸­å½ (China).

For those wishing to lodge disputes, they should consult the dedicated page for .CN and .ä¸­å½ domain name dispute resolution services, including links to the above policy and procedural rules, model pleadings and case fees.

The page also features a comparison table highlighting the differences between the .CN Policy and the UDRP.

Under the WIPO-initiated Uniform Domain Name Dispute Resolution Policy (UDRP) the WIPO Center has processed some 44,000 cases. WIPO also provides its domain name services for over 75 Country Code Top-Level Domains (ccTLDs) as well as a number of generic top-level domain including .com and a number of new gTLDs to which the UDRP applies.

The â¬1,000 discount applies to all complaints filed, irrespective of the number of domain names disputed and panel type requested.

For more information about the ADR Schedule of fees, see the CAC or the WIPO Center.

If you want to dispute a .eu or .ÐµÑ domain name registration and believe that you have a prior right (within the EU or EEA) to the domain name (e.g. you hold a trademark, trade name, company name, family name, etc) and the current holder has registered or uses the domain name in bad faith, you can challenge its registration by initiating an ADR procedure in accordance with the ADR rules. 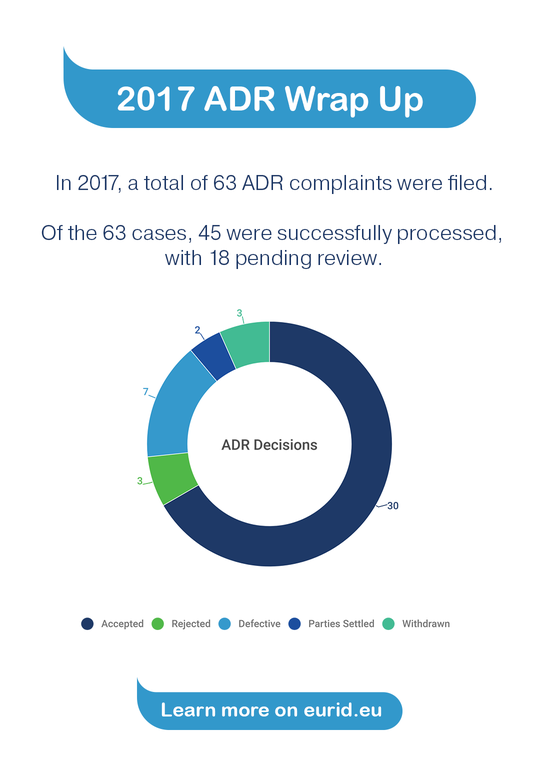 WIPO was appointed as a .eu and .ÐµÑ Alternative Dispute Resolution (ADR) provider on 1 June 2017. Since then, WIPO has already filed nine .eu ADR complaints, the first of which concerning the revocation of Instagram copycat, âlnstagram.euâ.

Of the nine complaints filed since the start of our partnership with WIPO, five have been successfully processed, leading to either domain name revocation or transferring to the complainant.

With both WIPO and the CAC by our side, we look forward to continuing to make the .eu and .ÐµÑ community secure and trustworthy.

To learn more about the decision, visit the official case page.

This EURid announcement was sourced from:
https://eurid.eu/en/news/wipo-eu-case/

[news release] The ADR procedure for holders of a trademark, tradename, company name or other rights to dispute speculative and abusive .eu andÂ  domain name registrations expands its filing options thanks to the addition of the WIPO Arbitration and Mediation Center as an ADR provider as of 1 June 2017.Â

âWe are very happy with how the ADR procedure has worked and developed since its inception in 2005. And while the Czech Arbitration Court (CAC) has done a great job of handling the numerous cases that have been submitted between then and now, we are pleased to provide more choices for the end user with the addition of the WIPO Center as an ADR providerâ, commented Geo Van Langenhove, EURidâs Legal Manager.

The WIPO Center will support cases in all 24 official EU languages. WIPO is one of the most well-known organisations in IP services, policy, information and cooperation, acting as the global leader in the provision of domain name dispute resolution services under the WIPO-designed UDRP. âThe addition of the WIPO Center as an ADR provider adds more convenience for rights holders to an already efficient ADR procedureâ, added Geo Van Langenhove. With the WIPO Center, disputes can be handled and processed via email, which adds an additional layer of convenience to the procedure.

About the WIPO Arbitration and Mediation Center

The WIPO Arbitration and Mediation Center is the global leader in the provision ofÂ domain name dispute resolution servicesÂ under the WIPO-designed UDRP. Since 1999, the WIPO Center has administered over 37,000 domain names disputes under the UDRP and related polices, covering over 68,000 domain names.Â  In addition to case services, the WIPO Center also makes freely available online resources, including the frequently cited WIPO Jurisprudential Overview of WIPO Panel Views on Selected UDRP Questions and a searchable Legal Index of WIPO UDRP Decisions. More information at: www.wipo.int/amc.

EURid is the not-for-profit organisation that operates the .eu and .ÐµÑ top-level domains, following a tender process and appointment by the European Commission. EURid works with around 700 accredited registrars and provides support in the 24 official EU languages. As part of its ongoing commitment to data security, EURid has been certified for the ISO27001 security standard since 2013. EURid is also registered by the EU Eco-Management and Audit Scheme (EMAS), which is an expression of its environmental commitment. EURid has its headquarters in Brussels (Belgium), and regional offices in Pisa (Italy), Prague (the Czech Republic) and Stockholm (Sweden). To date, over 800 cases have been filed and successfully processed through EURidâs ADR procedure. More information at: www.eurid.eu.

This EURid news release was sourced from:
https://eurid.eu/en/news/the-world-intellectual-property-organization-wipo-added-as-a-eu-and-eiu-adr-provider/

The World Intellectual Property Organization has released its 2016 report on cybersquatting. In 2016 the number of cases filed under the Uniform Domain Name Dispute Resolution Policy (UDRP) with the dispute resolution body rose 10% over the previous year to “an all-time record 3,036 cases” while domain names disputed rose by 23.1% to 5,374.

These are significant increases and an unwanted cost by trademark holders. A large part of the increase has to do with new generic top level domains. For new gTLDs cybersquatting disputes rose to 16% of WIPO’s 2016 caseload while, according to the most recent Domain Name Industry Brief from Verisign, they represent represented 7.2% of total domain name registrations at the end of 2016.

Verisign also reported that at the end of 2016 there were 329.3 million domain name registrations across all top level domains, which means the total number of disputed domains is still tiny. Global registrations grew by 6.8% for the year.

While there are other dispute resolution bodies and procedures, WIPO handles more disputes than others. And their numbers are misleading as they don’t reflect the changes in registration numbers.

“The continuing growth in cybersquatting cases worldwide shows the need for continued vigilance by trademark owners and consumers alike,” said WIPO Director General Francis Gurry. “This is even more important as a considerable number of these disputes involve incidents of online counterfeiting. In such cases, WIPO assists in restoring these domain names to trademark owners, thereby curbing consumer deception.”

The top sectors of complainant activity were banking and finance (12% of all cases), fashion (9%), heavy industry and machinery (9%), internet and IT (8%), biotechnology and pharmaceuticals (7%) and retail (7%). Philip Morris leads the list of filers – 67 cases – followed by AB Electrolux (51) and Hugo Boss, LEGO, and Michelin (42 each). In 2016 WIPO appointed 305 panellists from 47 countries, and administered proceedings in 15 different languages.

Cybersquatting cases lodged by trademark owners with the World Intellectual Property Organization (WIPO) grew 4.6 percent to 2,754 cases in 2015 while the number of domain names disputed is the lowest since 2008 with 4,364 lodged under the Uniform Domain Name Dispute Resolution Policy (UDRP).What WIPO don’t acknowledge is global domain name registrations have grown faster than cases lodged. For the 12 months to the end of September 2015, covering three-quarters of the same period, registrations across all top level domains and not just those for which disputes are lodged with WIPO, grew by 5.2 percent for the year according to the most recent Verisign Domain Name Industry Brief with a new brief due any day now covering the period to the end of 2015.So while cybersquatting cases in the TLDs that lodge disputes with WIPO grew, the number of domains registered across all TLDs grew faster meaning that on a per domain basis, cybersquatting cases actually dropped. This is not the first time WIPO has made similar claims.Country code Top Level Domains (ccTLDs) accounted for 13.7 percent of all filings with WIPO in 2015, with 71 ccTLDs designating this WIPO dispute resolution service.WIPO also report that cybersquatting disputes relating to new gTLDs accounted for 10.5 percent of WIPO’s UDRP caseload in 2015, which covered a total of 4,364 domain names. Among these names .xyz, .club and .email were the most common new gTLDs.Which is not to say brand owners should not be diligent or be concerned with cybersquatting. The damage to a brand’s reputation should a domain related to their brand be registered by cybersquatters can be substantial.Brands that lodged the most cases with WIPO in 2015 were Hugo Boss (62 cases), Philip Morris (60), Electrolux (48) and Hoffman-La Roche (41). Each case can contain more than one disputed domain name.Since the WIPO Arbitration and Mediation Center administered the first UDRP case in 1999, total WIPO case filings passed the 33,000 mark in 2015, encompassing over 61,000 domain names.The increase in new gTLD registrations in WIPO’s caseload is anticipated to continue WIPO say, in particular as new gTLDs contested at ICANN auctions, such as .shop, are yet to launch and registrations are growing at a rapid rate totalling 16 million to date.At the same time, ICANN has commenced a process to review Rights Protection Mechanisms such as the URS (Uniform Rapid Suspension system) and the UDRP. As the UDRP initiator and leading administrator, WIPO takes a strong interest in these ICANN processes.

Abstract: This article evaluates the performance of the special private tribunals or panels such as the UDRP which have been developed within complicated systems of self- and co-regulation such as ICANN to decide disputes over domain names.

It uses two different dispute resolution models viz. the UDRP (WIPO) and the Danish Complaints Board for Internet Domain Names (the Board) to discuss how and to what extent the domain name system balances interests between trademark owners and other users of domain names and secures the rule of law (legal certainty and predictability) with a special focus on cases where trademarks are used as (parts of) domain names to express criticism of the trademark holder or the trademark itself (e.g. âTMsucksâ / âlorteTMâ).

The article is part of a research project on âUser Generated Lawâ and uses the methodologies developed as part of this. 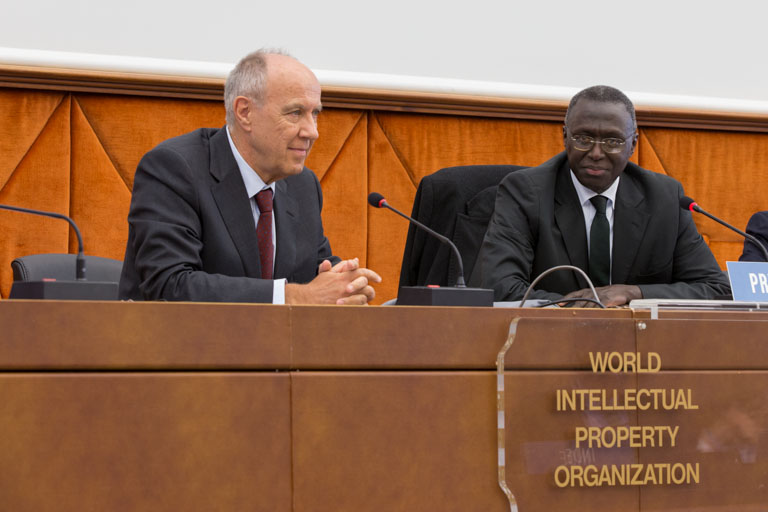 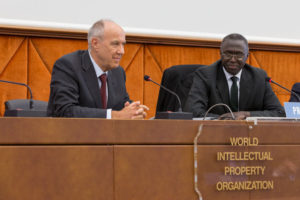 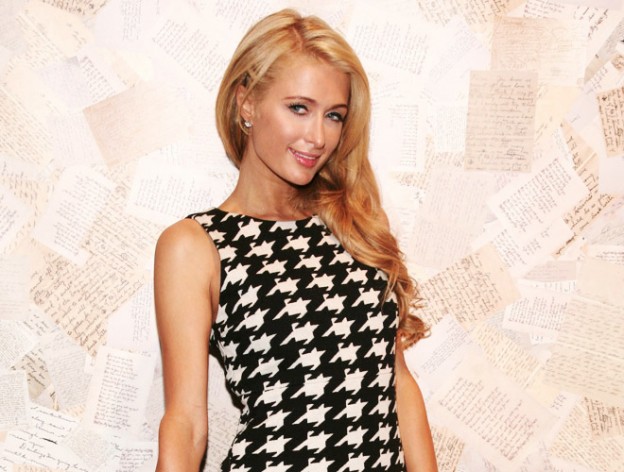