The .shop new gTLD announced in mid-July it passed the one million registrations mark, one of only six new gTLD’s that has surpassed the milestone. Aimed at online businesses/ecommerce, it launched in late September 2016 and took 15 months to reach the half million milestone and just over 3.5 years to reach the million.

END_OF_DOCUMENT_TOKEN_TO_BE_REPLACED

The domain names are being sold through Undeveloped and some of the prices are $25,000 for soccer.shop, $50,000 for football.shop and $1,999 for sportswear.shop. The GMO announcement doesnât say if the renewals are at the standard renewal fee or a premium fee.

There are now over 567,000 domain names registered in the new generic top level domain, making it the ninth largest of the new gTLDs.

Links to the domain names available and their prices are available in the .shop announcement here.

Over 11,000 new .shop domain names will become available for registration on 8 May, or possibly 18 May as the announcement gives both dates, including over 300 three and four character names, e-commerce terms and five number names. All of the names being released will be available at .shop regular pricing. These are not, the registry says, premium priced names.

The .shop registry is boasting that major brands and small business alike are turning to .shop domains for their online brands including beer company, Heineken who recently chose blade.shop to sell their newest plug and pour draught beer. More than 7,000 ecommerce businesses around the world use .shop domain names as their primary online address. Overall, the new generic top level domain (new gTLD) has around 566,000 domain names under management, making it the ninth largest of the new gTLDs, but almost three-quarters (73.29%, 415,000) are parked.

The .shop new gTLD gained a lot of attention when GMO Registry paid $41.5 million for it at auction. Today there are almost 328,000 registrations. Itâs the 13th largest of the new gTLDs by domains under management and has around the industry average number of parked domains at 58.34% indicating a reasonable usage. So from a registrations perspective, itâs performing well.

But as Online Domain points out, âit will take them many years to recoup their investment, if ever.â Itâs hard to disagree unless registrations jump dramatically. Even allowing for their approval for Chinese registrants Time will tell of course! But your correspondent will have to rethink their earlier thought GMO’s purchase of .shop “looking like being a great investment”.

The amount paid at auction though is dwarfed by what Verisign has paid for .web, a whopping $135 million. Which means Verisign will have to have registrations in the millions for it to pay off. Today that seems very hopeful. At best. 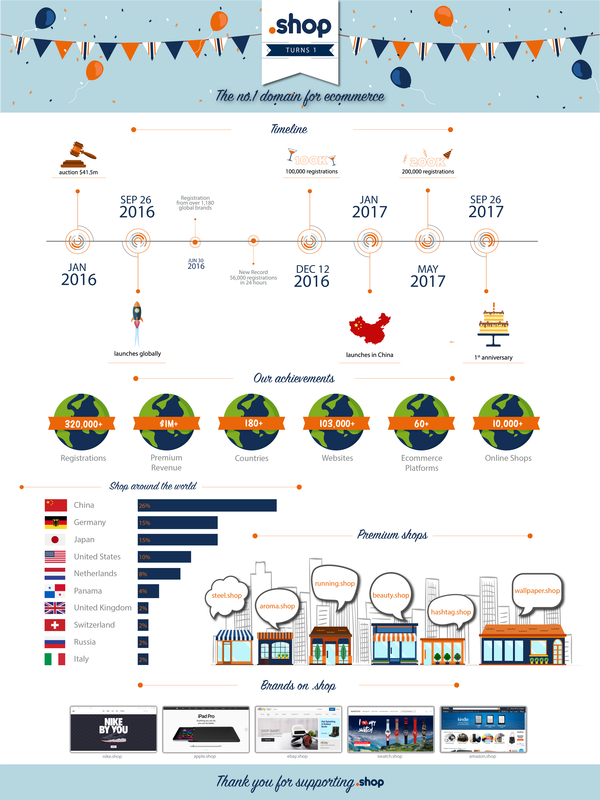 The Chinese market is one that requires lots of perseverance for the operators of TLDs wanting to offer their domain names to local customers. To get approval the registry operator must get approval from the Ministry of Industry and Information Technology (MIIT) first, and then the local regional communications department of the region where the domain owner is based must also recognise the TLD.

To date Beijing, a market of 22 million people, has been the only holdout. But on 16 August MMX’s .vip was the first of three foreign new gTLDs, along with .shop and .ltd, to be recognised by the Beijing Communications Administration. .vip is the first new gTLD in the top 10 by registration numbers to gain this permission. The approval gives the 3 new gTLDs a significant competitive advantage in a region with an economy with a GDP of circa 2 trillion CNY and a rapidly developed start-up/SME business sector.

MMX management also believe this latest permission will further accelerate the transition of those domains originally bought by investors in 2016, before MIIT approval, into the hands of SMEs. Already China's leading search engine, Baidu.com, recognises over 705,000 individual .vip pages from 188,764 different .vip sites and the Company is aware of further initiatives that will directly contribute to this continued usage growth of the domain in the coming months.

Separately, the MIIT approval process continues to progress on track on up to a further eight TLDs in mmx's portfolio.

Following the Chinese government approval to allow .xyz, .club and .vip domain names to be hosted in China, two more new gTLDs have gained approval – .shop and .site. Currently .site has 602,000 registrations and .shop 112,000 making then the 8th and 27th largest by registration numbers.Chinese registrants already make up the largest group of registrants by country for .site with 83% of registrations coming from China while for .shop it is 9% of registrations, the 4th largest, according to NameStat.org.The new generic Top Level Domains operated by GMO Registry and Radix respectively should gain a huge boost from Chinese registrants and domain investors (domainers) as the terms “shop” and “site” are widely understood in China, much like with the three previous new gTLDs to have gained approval.The only other top level domains to have gained such approval are Verisign’s .com and .net.But the approval comes with a number of conditions such as complying with Chinese domain name management, making registrant contact data available to the Ministry of Industry and Information Technology (MIIT), create a user complaints hotline and report each quarter on the gTLD’s operation.And as with the approval of .xyz, .club and .vip, it appears there is a downside with the Chinese government monitoring registration data.Radix announced they will launch in China on 11 January.

The .shop new gTLD has passed the 100,000 domain name registrations mark in a little over two months.

Aimed at online and even offline shops, the new generic Top Level Domain launched its General Availability on 26 September and saw over 50,000 registrations on day one. This followed very successful Sunrise and Landrush phases with 5,739 registrations. Today there are 100,330 registrations according to nTLDstats.com. 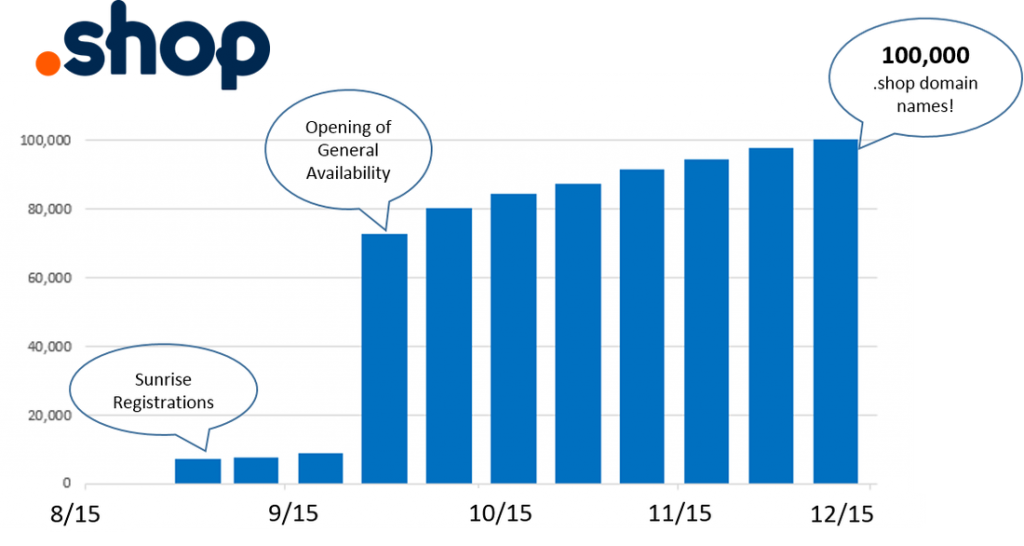 On June 30, 2016 .shop was opened for the first time exclusively to trademark holders. Over the two-month Sunrise period more than 1,180 domain names were applied for and allocated, making .shop one of the most successful new gTLD Sunrises to date. 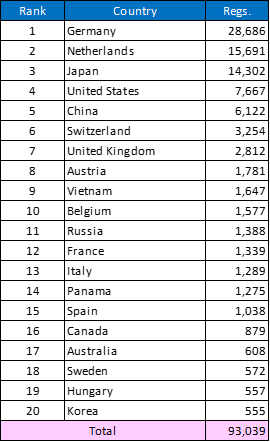 Following Sunrise, .shop entered an Early Access Phase, providing advance access to first pick of .shop domains! This phase attracted more than 5,200 registrations. On September 26, 2016 .shop was officially opened for business, and in the first 18 hours more than 53,000 domain names were registered, bringing total number of registrations to around 60,000. Since then registrations in .shop have grown steadily and on 12 December hit the 100,000 domain name milestone.

Looking at the geographical distribution of registrations, .shop has been registered in a total of 151 countries. Germany is the country that has the highest number of .shop domain names at 28,686. Coming in at second place is the Netherlands at 15,691, and Japan is in third place with 14,302 registrations. There is no doubt that Europeans are embracing .shop with more than 60% of registrations coming from European countries.

Registrants of .shop domain names will be able to take advantage of free SSL certificates for one year to secure their websites from late November. The option will enhance security for e-commerce providers and ensure their online customers are conducting secure and private transactions, as well enhanced security for websites.

âThe ecommerce market has grown 20 percent year-over-year for the past five years and continues to expand, the new availability of such a recognizable and easy to remember domain will help ecommerce businesses build brand recognition, said GMO Registry CEO, Hiro Tsukahara. âSecurity for ecommerce sites is a must, .shop websites secured by GlobalSign SSL allow website operators to secure sensitive customer information and build trust. We are excited to support the encrypt everything movement by offering this free certificate service to .shop domain owners.â

And in another change, GMO Registry announced due to strong demand from registrars and end-users, they amended the .shop Registration Policy to allow the use of Whois Proxy/Privacy services as of 21 October.

[news release] GMO Internet Group companies, GMO GlobalSignÂ and GMO Registry, announced today (8 Nov) that they will offer .shop domain owners free SSL certificates to secure their websites. Short, meaningful and relevant, .shop aims to become the global home of ecommerce. A .shop domain is ideal for online and offline businesses, including ecommerce, digital content providers and offline retailers. .shop SSL is expected to be available to .shop domain name owners by the end of November 2016.

.shop domain owners will become eligible to receive .shopSSL, one-year Domain Validated (DV) certificates after registering .shop domain name(s). Domain owners will experience seamless integration of SSL encryption as part of their website. For ecommerce providers, this allows for differentiation of their platform and provides their customers the ability to conduct secure and private transactions. Offline shops not quite ready to move into ecommerce, but wanting to communicate with their customers online, can also benefit from secured .shop domains.

âThe ecommerce market has grown 20 percent year-over-year for the past five years and continues to expand and the new availability of such a recognizable and easy to remember domain will help ecommerce businesses build brand recognition, said (Spokesperson). âSecurity for ecommerce sites is a must, .shop websites secured by GlobalSign SSL allow website operators to secure sensitive customer information and build trust. We are excited to support the encrypt everything movement by offering this free certificate to .shop domain owners.â

SSL encryption has been at the forefront of cybersecurity discussions with acknowledgement from consumers, businesses, Certificate Authorities (CAs) and other stakeholders that the reported ratio of websites secured by SSL is woefully low. GlobalSign and GMO Registry are helping to make the internet safer and ecommerce more trusted for everyone by offering .shop domain owners a one year free DV SSL certificate. For domain owners looking for increased security and higher assurance certificates, GlobalSign is a trusted provider of Organization Validated (OV) and Extended Validation (EV) SSL certificates.

In addition to security, SSL plays a direct role in Googleâs search ranking algorithm. Google encourages all sites to secure visitor information with SSL certificates by recognizing HTTPS as a ranking signal.