On 26th July the RNIDS Foundation will move to a new Domain name registration system called RSreg 2.0. The new system will be used for the registration of .rs and .ÑÑÐ± domain names. The new RSreg software is the result of several years of development by local experts and has all the features that fit the requirements of modern registries.

During the handover to the new system, the registration of new domain names and the service for registered domains availability check (Whois), will temporarily be offline â from the morning of 26th July to later that afternoon. There will be no interruption to the operation of existing registered domains, and visitors to sites on the national internet domains will not notice the move to RSreg 2.0 at all.

The new domain name registration system will provide additional support to RNIDS registrars and allow them to use the standard EPP protocol, also used in the registration of generic domains (.com and others). It will also allow the new General Terms and Conditions for the Registration of National Internet Domain Names to come into force. These terms emphasize the requirement to supply a correct e-mail address for the registrant, which will now be compulsory for verifying data on a registered domain name. The new system will provide new functions such are Registry lock (server side domain lock), more secure change of registrant and domain transfer with the use of an authentication code.

The registration system is based on an advanced, high-uptime, virtualized computing infrastructure and new software. The software architecture was designed by the Belgrade University Faculty of Electrical Engineering, with a modular structure that allows for greater reliability, security and performance, as well as easier maintenance and upgrading.

The new General Terms and Conditions for the Registration of National Internet Domain Names is available here.

[news release] CENTR is happy to announce that it has elected its new Board of Directors at the associationâs 55th General Assembly in Budva, Montenegro. JÃ¶rg Schweiger (DENIC, .de) was elected as Chair of the organisationâs Board of Directors. Pierre Bonis (AFNIC, .fr) and Irina Danelia (Coordination Center for TLD .RU/.Ð Ð¤) were also elected as Board members. All new terms are effective as of 17 February 2016. They join current Board members Elisabeth Ekstrand (IIS, .se) and Danko JevtoviÄ (RNIDS, .rs/.Ð¡Ð Ð), who were elected on 19 March 2015. Danko JevtoviÄ has also been appointed Treasurer of the Board.
JÃ¶rg Schweiger studied computer sciences and economics. Before joining DENIC in 2007, he held various IT management positions in the insurance business. After 7 years as Chief Technology Officer, he became DENICâs CEO in 2014. 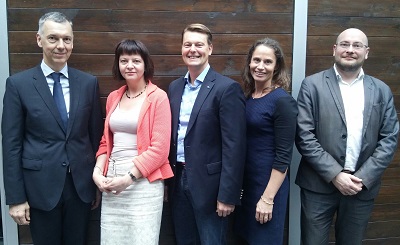 Pierre Bonis has 15 yearsâ experience in the field of ICTs, both in government (foreign affairs and digital economy ministry) and in the private sector (AFNIC). He has been Deputy CEO at AFNIC since 2012. He graduated in literature, philosophy and law.
Irina Danelia is a physicist by training and a graduate from the Moscow Lomonosov University. She has nearly two decades of service in executive positions in the international and Russian telecommunication industry. She has been an executive at the Coordination Center for TLD RU/Ð Ð¤ for more than 6 years.
CENTR wishes to warmly thank the contribution and unabating commitment of its outgoing Chair Giovanni Seppia (EURid, .eu), as well as outgoing Board members Richard Wein (NIC.AT, .at), who was first elected in 2006 and re-elected as Treasurer since, and Lise Fuhr (formerly DK Hostmaster, .dk), who was elected in February 2012. CENTR further congratulates the newly elected Board Chair and members, and wishes them great success in their new positions.
This CENTR news release was sourced from:
https://centr.org/news/ga55/02-18-2016/4725/centr-welcomes-its-new-board-directors

The latest CENTR Domain Wire Stat Report shows that Montenegro (.me), Serbia (.rs) and Slovakia (.sk) are the European countries with the highest market share of the local ccTLD with 99 percent, 90 percent and 87 percent respectively.This means that in Montenegro, 99 percent of all domain names registered in the country across all top level domains are .me domains.The biannual report covers a wide number of statistics for Europe, such as there are 61.7 million country code domain names registered in Europe which is around a quarter of the 245 or so million domain names registered globally.And the European ccTLD with the highest growth rate is .pt (Portugal), but this is largely because registration policies for the ccTLD were liberalised earlier this year. And across Europe, two in five (40%) domain names are registered by individuals, while the remaining three in five are registered for commercial purposes. Plus the average length of a domain name is 11.2 characters and the top three registrars account for 45 percent of all European registrations.The report includes a list of the top 20 ccTLDs globally, which is headed by .de (Germany) with, as of the end of September, had 15.2 million registrations. There followed .tk (Tokelau – 10.83m) and .uk (United Kingdom – 10.24m).Within the top 20 list, the highest growth (year on year) has been achieved by .cn (China) at around 26.6 percent, partly due to changes in registration requirements. Second was .co (Columbia) with an increase of 25.1 percent, then .ru (Russia – 16%) .fr (France – 16%) and .br (Brazil – 15%). The median growth of the top 20 ccTLDs year-on-year was 11.5 percent.And IDN ccTLDs make up around 0.40 percent of the roughly 245 million domain names registered around the world, with the largest being .рф – the IDN ccTLD for the Russian Federation – with around 840,000 registrations.To download the complete Domain Wire Stat Report, go to centr.org/news/statistics/12-03-2012/2462/domainwire-stat-report-available.

The .YU country code Top Level Domain slid into darkness on Tuesday when it stopped functioning at midday local time.

The decision to end .YU was taken by ICANN back in March 2008 after the breakup of the former Yugoslavia, the Serbian National Register of Internet Domain Names (RNIDS) said.

At the same time as the ending of .YU was announced, the .RS ccTLD for the Republic of Serbia, came into being.

During the following six months the owners of .YU domain names were given priority to register their domain with the .RS ccTLD, an option that was taken up by 19,372 registrants in total.

Around 4,000 registrants of.YU domains have maintained their registration until Tuesday when they were no longer visible online.

To commemorate the demise of .YU, the Museum of Yugoslav History hosted a farewell party and now the .YU domain becomes a part of the museum. At the event, guests were able to get a glimpse of the first computer produced in Serbia and watch a documentary that showed the role of Serbian hackers.