Nominet last week published a report [pdf] on .uk domains that showed the number suspended for criminal activity over the past six months is miniscule.

The criminal activity report showed 948 .uk domains were suspended between May and October 2014. This represents less than one-hundredth of a percent (0.009%) of the 10.5 million .uk domains currently registered.

Nominet suspends domains following notification from the police or another law enforcement agency that the domain is being used for criminal activity. 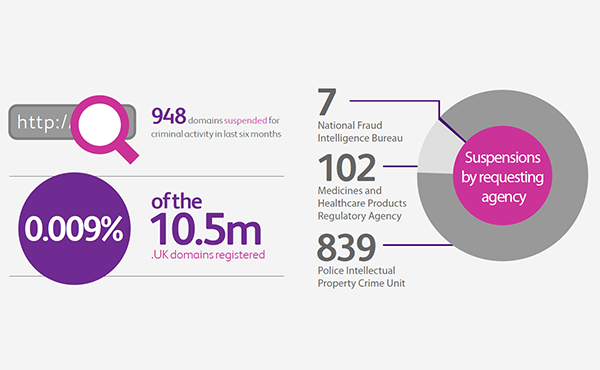 The report also provides an update on domains suspended under Nominetâs offensive names policy, introduced in May this year following recommendations from Lord Macdonald QC. Nine domains were suspended and blocked after a review of all domains on the register when the policy was introduced. A further two have been suspended and blocked in the subsequent six months.

In another report, Netcraft warned of a typosquatting scam taking advantage of the new second level .uk registrations.

According to Netcraft, the scam involves scammers registering domains such as nameco.uk in the hope they will confuse internet users with the newly introduced second level .uk domains and the pre-existing name.co.uk third level domains.

Many of these typosquatting domains are being monetised by displaying ads related to the legitimate domains they are impersonating, or by using referral schemes to redirect visitors to the corresponding legitimate site â or even driving visitors towards competing services, according to Netcraft.

The number of “active” .tk domains has passed the 25 million mark to cement its position as the largest ccTLD, and second largest TLD.

According to the nic.tk website, the number of domains under management is currently more than 25,089,000. The growth has been phenomenal for the island ccTLD that passed the seven millionth DUM in late 2011 and the largest ccTLD in late 2012.

The island nation located north east of New Zealand and Australia in the South Pacific is a New Zealand territory with a population of 1,337 according to the CIA Factbook.

The exponential growth of Dot TK continues because of its free domain name registration process, which has been somewhat controversial due to the amount of phishing activity linked to .tk domains. But the registry has worked hard to improve the problem.

Dot TK, the registry, introduced an anti-abuse API to allow trusted partners to shut down sites that use .tk. Netcraft noted in September 2013 that “this dramatically reduced the average uptime of phishing sites which used .tk domains, making it a less attractive platform for fraudsters. Indeed, .tk does not even appear within the top 50 phishiest TLDs today; however, considering .tk and .ml share the same owner, this makes it somewhat surprising to see .ml being so heavily abused already.”

Registering domain names in Maliâs ccTLD, .ml, has been free since July, but they come with an added bonus â phishing. According to a report published by Netcraft, âMali now has the most phishy top-level domain of any country in the world.â

The Malian ccTLD recently joined .tk (Tokelau), whose registry operator Dot TK is a subsidiary of Freedom Registry who is the registry operator for .ml, and is the largest ccTLD with over 15 million registrations and who also had major problems with phishing. But Dot TK introduces an anti-abuse API to allow trusted partners to shut down sites that use .tk. Netcraft note that âthis dramatically reduced the average uptime of phishing sites which used .tk domains, making it a less attractive platform for fraudsters. Indeed, .tk does not even appear within the top 50 phishiest TLDs today; however, considering .tk and .ml share the same owner, this makes it somewhat surprising to see .ml being so heavily abused already.â

For the complete list compiled by Netcraft of the worldâs 50 phishiest ccTLDs, go to toolbar.netcraft.com/stats/tlds.