Registration for the 2022 Nordic Domain Days to be held in Stockholm in May 2022 has opened. The conference that focusses on the domain name industry in the five Nordic countries – Denmark, Norway, Sweden, Finland and Iceland, and let’s not forget the Faroe Islands, Greenland and Åland as well, is aimed as a means of discussing domain name issues for the Nordic region, and is aimed at registries, registrars, resellers, service providers and investors.

END_OF_DOCUMENT_TOKEN_TO_BE_REPLACED

Due to the ongoing pandemic, the European Commission has asked EURid, the .eu registry, to continue monitoring new .eu domain name registrations using their APEWS – Advanced Prevention and Early Warning System – platform for Covid-related keywords until 31 December 2021. The initial measures for these checks were set in early April 2020 in order to protect end-users from possible misuse of domain names.

END_OF_DOCUMENT_TOKEN_TO_BE_REPLACED

It is now possible to register Danish domain names with the German character ẞ – also called scharfes S or double-s.

END_OF_DOCUMENT_TOKEN_TO_BE_REPLACED

DK Hostmaster is running free courses on IT security in May at their offices in Copenhagen. The courses are to help gain an insight into different techniques to tighten security of domain names.

The courses are run over 4 days from 6 to 9 May and each dayâs course is listed below:

All courses take place at DK Hostmaster in Ãrestaden, Copenhagen and include catering.

To register, send an e-mail to registration@dk-hostmaster.dk with name, company name and course title.

DK Hostmaster has increased identity checks for Danish and foreign customers and deleted over 3,000 domain names of suspected fake stores since November 2017. In addition, DK Hostmaster supports an open WHOIS, which is helping to create transparency so it continuously is possible to see who is behind a .dk domain name.

âASOP Global is pleased to recognise DK Hostmaster for their outstanding efforts to prevent the illegal use of domain names for online drug sales and rapidly responding to any complaints,â said Libby Baney, Principal at Faegre Baker Daniels Consulting and senior advisor to ASOP Global. 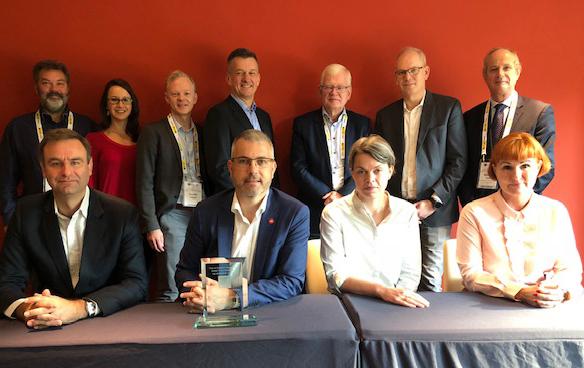 âDK Hostmaster is honoured to receive this award for our continued efforts to ensure a safe and trustworthy .dk zone through transparency and focus on ensuring the identity of the owners of a .dk domain nameâ said DK Hostmaster CEO, Jakob Truelsen.

âDK Hostmasterâs policy to keep WHOIS data open and transparent creates a more secure, trustworthy environment in the .dk namespace,â Baney commented. As a member of the Coalition for a Secure and Transparent Internet, ASOP Global further commends DK Hostmaster for their policy on transparent WHOIS and encourages other registries and registrars to follow thier lead.

âTransparency has shown to be an effective tool to prevent abuse. Sunlight has proven to an effective disinfectantâ said DK Hostmaster CEO, Jakob Truelsen.

DK Hostmaster has announced they updated their systems and modernised the way .dk domain names are registered as of 30 August.

DK Hostmaster say their customers can now easily and quickly can proceed from ordering the domain name at one of their registrars to be able to use the domain name.

The Danish ccTLD manager, Dansk Internet Forum (DIFO), has reduced the number of online shops engaged in suspicious scams using .dk domain names, such as those selling counterfeit goods, by 3,000 since November 2017 leaving around 50 remaining.

The reduction in the number of suspected scam shops has come about largely due to identity checks introduced in 2017 for both Danish and foreign .dk registrants.

One of DIFO’s tasks is to make sure that the Danish part of the Internet is as secure as possible and that there is trust in .dk domain names and websites. One of the ways they have done this is through e-mark, a non-profit organisation representing more than 2,200 Danish companies working with e-commerce. The e-mark certifies good web-shops and gives the consumer confidence they are dealing with a trusted online store.

âWe are very pleased with the excellent result DIFO has achieved by reducing the number of scam web shops that end with .dk. One scam shop is one too many, but at the current level, the .dk zone can be considered to be one of the safest zones in the world,â says CEO of the e-mark Jesper Arp-Hansen.

The increased identity checks mean Danish registrants must now be validated with NemID, while all foreign customers are assessed based on a risk assessment. DIFO has thus been able to delete domain names where the registrant has not been able to or would not reveal their identity.

DK Hostmaster has introduced âan intensified control of the identity of customers living outside Denmarkâ in an effort to combat abuse of the countryâs ccTLD. The move follows the implementation of mandatory identification with NemID for Danish costumers in November.

DK Hostmaster intends the intensified identity control to ensure Denmarkâs country code top level domain is as free of abuse as possible. With this initiative it is expected the number of seized .dk domains will decrease in the future. Documentation required by DK Hostmaster for registrants living abroad will be assessed on a case-by-case basis.

There are also new terms and conditions for .dk domain names. The new T&Cs came into effect on 19 December. The changes involve:

The changes to the terms and conditions have come about following a consultation with the Danish internet community in 2017.

DK Hostmaster believes these changes will support transparency on the Danish internet and help prevent cybercrime.

The Danish registry DK Hostmaster has entered into a partnership with authorities and private internet companies in the fight against financial cybercrime. Following consultations in April that were aimed at cutting crime involving .dk websites, a number of initiatives were identified including increased collaboration, knowledge sharing and optimisation of processes.

One of the challenges identified, especially for smaller police districts, was identifying information about who is behind a website and who has registered the domain name. As a result DK Hostmaster created a guide to what information they hold and how to find it.

The guide for Danish police, in Danish, on what DK Hostmaster provides is available for download from:
https://www.dk-hostmaster.dk/en/release-data-police

DENIC is warning .de domain registrants of German-language emails coming from the forged email address of info@denic.de. The emails claim to acknowledging a domain transfer and have the subject “DENIC eG â Domain-Transfer BestÃ¤tigung”. DENIC is advising the emails have nothing to do with them and contain a ZIP file that contains malware.

EURid currently has open the .eu Web Awards. The awards are an online competition where .eu and .eÑ websites can be nominated for a chance to win a prestigious award to be presented at a stunning ceremony in Brussels.

The IE Domain Registry has published their annual report for 2015. The report includes a large amount of information for those interested in .ie stats, such as there were 35,225 new .ie registrations in 2015, an increase of 13.4 percent when compared to 2014 (31,072). Accounting for .ie non-renewals or deletions, there was a net increase in registrations of 12,929, an increase of 48 percent on 2014 net registrations.

Turnover increased five percent to â¬2.86 million. The company registered an operating loss of â¬517,082 in 2015. The loss is principally accounted for as a result of expenditure of â¬508,000 on activities under the companyâs Strategic Development Fund.

Commencing on 6 July, .ro domain registrants have the option of signing their domain names with DNSSEC the Romanian registry RO TLD has announced.

Have you ever wondered about what the .dk registry should do about severe violations and misuse of .dk domain names? If so, DIFO invites you to participate in the consultation that extends over the Danish summer.

On 6 June, DIFO held a successful hearing which started a debate about when a domain name can be suspended, how the registrant is validated and what personal information DIFO may pass on.

A large number of representatives from the Danish internet community, from government authorities and the Copenhagen Police to a wide range of IT suppliers participated.

Issues to be considered include should the process of suspending a domain name become faster than it is today? One proposal is to create a special suspension board with responsibility for the suspension of domain names. Can you thereby ensure efficient treatment of cases of evident crime on Danish domain names? What about the legal certainty?

DIFOâs validation of the identity of registrants behind a domain name is currently carried out by letter but perhaps the current validation model should be tightened up? A more restrictive solution with forced NemID validation for Danes and an activation code by post for foreign registrants gained great support at the oral hearing. However there were strong voices against increased control and concerns that domain registration will become too difficult for the customers.

Should DIFO disclose information about anonymous registrants to authorities and individuals quicker and easier than today? DIFO looks forward to see the right holders participate in the written hearing.