END_OF_DOCUMENT_TOKEN_TO_BE_REPLACED

The Brazilian ccTLD registry manager, NIC.br, has announced they will be adding 12 new second level domains on 20 July with domain names registered in these 2LDs to be priced at R$40 per year, around US$7.60.

END_OF_DOCUMENT_TOKEN_TO_BE_REPLACED

Google has taken a step to resolving its spat with publishers, saying it would pay some media groups in Australia, Brazil and Germany for high-quality content and expects to do more deals with others.

END_OF_DOCUMENT_TOKEN_TO_BE_REPLACED

ICANN has announced registration is now open for the 2018 LAC DNS Forum to be held in SÃ£o Paulo, Brazil. The theme of this year’s event, which is part of AbraHosting Day, is “New Technologies and Digital Security.”

The LAC DNS Forum brings together industry, Internet policy, and technical professionals interested in debating DNS-related issues. The forum also provides an opportunity to engage and network with key players and experts in the field.

The forum is open to anyone interested in issues related to the domain name industry and its potential business opportunities. The target audience includes:

This will be the fifth edition of the LAC DNS Forum, which was first held in Buenos Aires, Argentina in 2013. This year’s event is jointly organized by Abrahosting, the Latin American and Caribbean ccTLDs Organization (LACTLD), the Latin American and Caribbean Address Registry (LACNIC), the Internet Society (ISOC), the Public Interest Registry (PIR), and the Internet Corporation for Assigned Names and Numbers (ICANN).

Registering domain names in a country code top level domain often has benefits to that country’s local internet community. In the case of Canada’s ccTLD, Byron Holland, President and CEO of CIRA who manages .ca, recently explained how in a post on the company blog. END_OF_DOCUMENT_TOKEN_TO_BE_REPLACED

There are over 120 second level domains under which .br domain names can be registered from blog.br and wiki.br for individuals to eng.br and adv.br for liberal professionals, tv.br and tur.br for legal persons, rio.br, sampa.br and curitiba.br for cities those reserved for specific purposes such as gov.br, jus.br, b.br and org.br among others. Some of these have as few as 10 registrations, while the largest, com.br has 3,645,125 accounting for 91.2% of all registrations.

According to the latest Verisign Domain Name Industry Brief, .br is the seventh largest country code top level domain (ccTLD). Verisign already had .br at 4 million domain name registrations at the end of 30 June, probably through rounding, up in this case, to the nearest hundred thousand. Chinaâs ccTLD was the largest with 22.7 million followed by Tokelauâs free .tk (21.5m), Germanyâs .de (16.3m), the United Kingdomâs .uk (12.0m), Russiaâs .ru (5.9m), the Netherlandsâ .nl (5.8m). Following .br is the European Unionâs .eu (3.8m), Franceâs .fr (3.2m) and rounding out the top 10 is Italyâs .it (3.1m).

Revenues from .br registrations allow NIC.br to, in addition to providing and maintaining the infrastructure behind .br, invest in a series of actions and projects that generate benefits and improvements to the internet infrastructure in Brazil. These include the operation of internet traffic exchange points, which promote the interconnection of networks that form the Internet in Brazil, reducing distances and costs; the handling security incidents and tracking internet statistics.

Nic.br notes that other advantages of registering .br domain names include additional security features, such as token and encryption, that strengthen both the accounts of Registro.br users, and their respective domains. There is another recent feature: a redirection feature that lets you point a .br domain to any URL, whether it’s on a website or the preferred channel on social networks, keeping identities and active tags on the Internet permanently. Servers distributed by Brazil and other regions of the world guarantee speed and reliability in the resolution of .br and a team exclusively dedicated to meet and assist users in their doubts complete the description.

The CentralNic Group plc has spread its wings into Romania and Brazil with the acquisition of the business assets of Delaware-based GlobeHosting Inc., a leading registrar and domain hosting provider in multiple markets including Romania and Brazil.

This transaction is CentralNic’s third acquisition in nine months, as it continues its industry consolidation strategy, expanding into key markets that offer significant growth opportunities.

“GlobeHosting plugs very easily into CentralNic’s business operations and enhances the quality of the Group’s earnings,â said Ben Crawford, CEO of CentralNic. The transaction adds to CentralNic’s access to the Romanian and Brazilian markets, which each exhibit attractive characteristics for sustained growth, as well as taking advantage of the upselling capabilities and economies of scale that CentralNic brings to the companies it acquires.”

GlobeHosting is a recurring revenue business operating as a registrar and retailer of domain names and SSL certificates, and a hosting provider servicing principally the Romanian and Brazilian markets. Its businesses fit comfortably into CentralNic’s Retail and Reseller divisions, two of the four key industry channels alongside Corporate and Registry, all of which are well-served by CentralNic following its August acquisition of KeyDrive S.A. for a maximum consideration $55 million.

The total consideration of â¬2.56 million comprises an initial consideration of â¬1.5 million, coupled with a deferred payment of â¬608k due on the first anniversary of completion and â¬450k due on the second anniversary of completion. It is 3.0 times GlobeHosting’s revenues of â¬849k for the 12 months to 31 July 2018 and 6.1 times its EBITDA of â¬419k.

Romania’s country code, .RO, is undergoing significant adjustment from which GlobeHosting is expected to benefit, with imminent changes to its pricing structure involving all existing .RO users renewing their domains. Internet penetration in Romania is growing with an approximately four per cent increase in 2017. Currently approximately 60 per cent of Romania’s circa 20 million population uses the Internet. 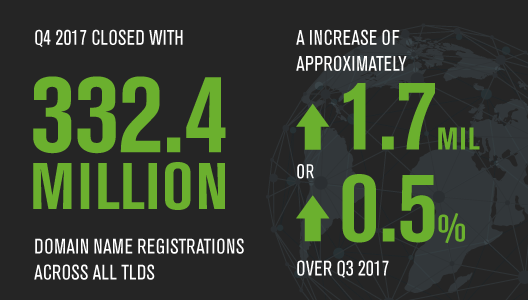 Global domain name registrations continue to rise, with approximately 332.4 million registrations at the end of 2017 across all top level domains, according to the latest Verisign Domain Name Industry Brief out today. The increase for the fourth quarter was approximately 1.7 million domain names, or 0.5%, from the third quarter and 3.1 million, or 0.9%, year over year. 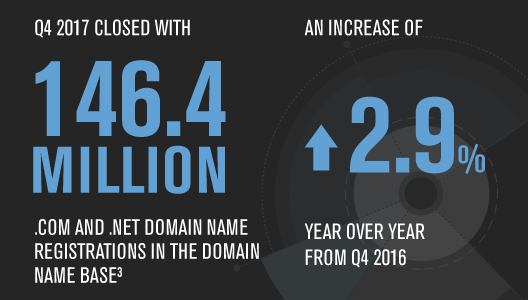 There were 293 global ccTLD extensions delegated in the root, including Internationalised Domain Names (IDNs), with the top 10 ccTLDs composing 64.7 percent of all ccTLD domain name registrations.

The registry fee, the fee charged to registrars, for .br (Brazil) domain names will increase to R$40 ($12.30) from the current R$30, an increase of one third, on 1 January the registry NIC.br announced.

The increase is the first since 2003 Demi Getschko, President and CEO of NIC.br said.

“After 13 years of real value maintained without change, it’s time to fix it, even partially. The Brazilian record has always been committed to maintaining the functioning of. br within the best international standards and, we can say, we have the assurance that we will keep the unassailable quality.”

Up until 31 December, registrants will be able to renew or register new .br domain names at the current fees, unless there are changes in fees at the registrar level.

NIC.br in announcing the fee increase said that revenue from domain registration activity under br and distribution of IP numbers not only supports the functioning of these services internationally, is invested in activities and projects that bring benefits to the internet in Brazil, such as internet traffic exchange points; monitoring of security incidents in Brazil; study and research of network technologies and operations; production of indicators on information and communication technologies (ICT); Web development in Brazil.