[news release] auDA (.au Domain Administration Ltd) together with the Government of Timor-Leste and APTLD (Asia Pacific Top Level Domain Association) are today (18 July) pleased to announce the signing of a ground-breaking joint venture between the parties. Together, these three organisations have agreed to work toward and assist the further development of the .tl ccTLD, its policies and functions.

auDA have committed to assisting Timor-Leste to create a vision, strategy and policies as well as a capacity and technologyÂ project forÂ .tl As part of the scope this project will consider building capacity for a robust and sustainable ccTLD to benefit the Timor-Leste people, includingÂ looking at the operational development of the registry.

auDA has pledged to provide the project funding and to support the engagement of industry expert, Samantha Dickinson, to lead the project on the ground.

The CEO of auDA, Cameron Boardman said â âwe have been in discussions with APTLD and Timor-Leste since my first APTLD meeting in late 2016 around how best we can support our Pacific neighbours through capacity building. Today marks the realisation of our successful engagement with Eng. Nicolau Santos Celestino, Director of Information and Technology in Timor-Leste and APTLD to provide a knowledge and expertise sharing initiative to enhance the ccTLD community within the region. We hope this will be the start of many other, similar joint ventures across the APTLD network.â

Eng. Gastao Francisco de Sousa â Minister for Public Works, Transport and Communications said – âwe realise that together, Timor-Leste and auDA are opening a new page in the history of traditionally friendly relations between the two nations and launch a unique exercise for the region. It is therefore our duty to lead by example and deliver on the ambitious agenda so that to further benefit our immediate neighbours and community members across the region.â

And APTLD’s GM agreed that âthe project adds a new dimension to our activities with a leading APTLD member committed to deliver genuine capacity building and technical assistance to another, thereby demonstrating APTLD membersâ institutional maturity, commitment to common values, and eagerness to jointly address challenges facing some ccTLD registries in Asia Pacific.â

We look forward to sharing progress on this fantastic project, for the benefit Timor-Leste internet using community and will report back of time.

This auDA news release was sourced from:
https://www.auda.org.au/news/auda-and-aptld-commit-to-assist-timor-leste-in-a-ground-breaking-capacity-building-project-in-the-pacific-region/ 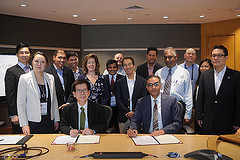 Under the cooperative agreement, ICANN and APTLD will work together to coordinate and collaborate on complementary activities within the Asia Pacific (APAC) region to strengthen the capacity and capability of country code Top Level Domain operators (ccTLDs) in the region; promote and encourage APTLD members’ and regional stakeholders’ participation and involvement in ICANN, and foster a network of regional stakeholders and decision makers that could contribute to ICANN‘s policy development, and more broadly, global Internet policymaking.

APTLD Chairman, Lim Choon Sai and Fadi ChehadÃ© signed the MOU at ICANN‘s 52nd Public Meeting in Singapore, witnessed by members of the APTLD Board.

“APTLD appreciates ICANN‘s globalization efforts and the ICANN Asia Pacific Hub’s work in engaging with the APAC community. As a region, we need to work together to strengthen the capacity of our operational functions, as well as contribute to ICANN‘s policy making,” said Lim Choon Sai. “As such, we hope to work with key stakeholders in each sub-region of the Asia Pacific region, including ccTLD registries and other concerned entities in our collaboration activities.”

Kuek Yu-Chuang, ICANN‘s Vice President and Managing Director for ICANN Asia Pacific said that the APTLD meets regularly and plays a key role in fostering a network amongst the ccTLDs and regional organizations in the region.

“We are very excited to collaborate with a key regional partner such as the APTLD. Our cooperation will definitely help to strengthen regional collaboration. From ICANN, we hope to be able to contribute by adding our expertise to help our APAC ccTLDs build their operational capacity, including areas such as DNS network operations, DNS Security, Internet Infrastructure Development etc. The gathering of ccTLDs and other key stakeholders at APTLD also provides a good platform for us to update on and discuss ICANN issues from a regional perspective,” he added.

âOnly by pursuing a policy of multilingualism in Internet access can we give effect to our policy of an Internet that is truly global, and truly accessible to all,â states European Commission Vice-President, Neelie Kroes, in the foreword of the IDN World Report 2014 produced by EURid with UNESCO in cooperation with Verisign and the country code Top Level Domain regional organisations (CENTR, LACTLD, APTLD and AFTLD).

The annual report is being presented today during a workshop at the Internet Governance Forum in Istanbul, Turkey, which takes place from 2 to 5 September.

Internationalised domain names (IDN) were first launched at the second level (eg ÏÎ±ÏÎ¬Î´ÎµÎ¹Î³Î¼Î±.eu) in 2000. From 2009, it became possible to register domain names entirely in non-Latin scripts (eg ä¾å­.ä¸­å½). At the end of 2013, there were 6 million IDNs (including second level names and IDN TLDs). Although this is a large number, it is just 2% of the worldâs registered domain names (270 million).

EURid, the registry manager of the .eu Top Level Domain, has been supporting IDNs at the second level since late 2009 and has applied for the .eu in Greek and Cyrillic to ensure that the EU citizens can enjoy a complete IDN experience when writing languages that are not based on the Latin alphabet. âWe are proud to have supported multilingualism through IDNs since the very beginning and to offer an extended customer support in all 24 official EU languages and, hopefully in the near future, the .eu TLD in Greek and Cyrillic,â commented EURidâs External Relations manager Giovanni Seppia.

The report contains evidence that shows that, far from being âinternationalisedâ, IDNs are intensely localised. They are strongly linked to local language content, and although they occur in diverse writing systems, the location of such scripts is closely coupled to countries and regions where related languages are spoken.

New gTLDs promised to fulfil unmet needs in the domain name system. One obvious need is for enhanced linguistic diversity. With 90% of new gTLD strings (eg .photogra- phy) either in English language, or understandable in English, that opportunity has been lost â for now.

âThe growth potential for Internet penetration is in Asia and the Pacific, Africa, and Latin America where English is not the primary language. For IDNs to fulfill their potential, multiple actors need to make changes to hasten universal acceptance, so that IDNs can be used seamlessly in every environment,â concludes the reportâs main author Emily Taylor.

This EURid announcement was sourced from:
www.eurid.eu/en/news/sep-2014/languages-move-internet-landscape