New Zealanders are being encouraged to comment on the proposed change to allow registrations at the second level. Currently under .NZ, registrants can only register domain names at the third level, such as .co.nz.

The Domain Name Commission Limited (DNCL) is conducting the consultation with the Chair Joy Liddicoat saying that there are both potential benefits and potential issues to consider. 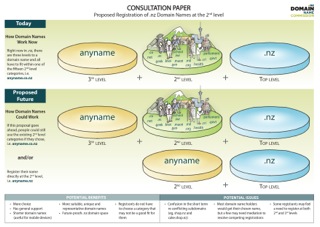 “I understand that allowing registrations directly at the second level could cause confusion in the short-term, but also believe it could improve the .nz domain name space in the long-term,” she says.

“For one thing .nz domain names, especially for personal use, do not always easily fit into one category. DNCL is concerned that people are being forced to choose a second level domain when there is no technical reason for this.

“If the proposal went ahead, an advantage is that it would offer more choice to consumers.

“On the other hand, one potential issue we have considered is that people might feel as if they need to register their domain names at both second and third levels, for example getting both anyname.co.nz and anyname.nz.”

If the proposal goes ahead, registrants would have a choice of registering domain names at the third level, as is currently the practice under .ac, .co, .geek, .gen, .kiwi, .mÄori, .net, .org and .school, or the under the second level such as name.nz.

During the first round of consultation, it was clear that there was no clear consensus as to whether people were for – or against – the proposal.
A major concern expressed by some submitters was that existing registrants could feel “forced” to incur extra costs in registering anyname.nz on top of their existing anyname.co.nz name. To mitigate this issue, DNCL is proposing that existing registrants be able to reserve registration of the equivalent of their current name at the second level (for no cost for at least two years). The DNCL believes this modified proposal delivers significant benefits to registrants without disadvantaging those who do not wish to use a name at the second level. There are also other changes to the proposal following the initial consultation.

The DNCL has conducted polls amongst New Zealanders that have found an they increasingly support this change. For example, in 2003 only 25 percent of New Zealanders showed a preference for being able to register domain names directly at the second level. However, in a 2011 survey, 59 percent of registrants said they did.

Full details of the consultation document and background material are available at dnc.org.nz/second_level_proposal_c2. Online submissions can be made at https://www.research.net/s/dnc_consultation2. The cut-off date for submissions is midday Wednesday 31 July, 2013.