Researchers at Japan’s National Institute of Information and Communications Technology (NICT) have broken the internet speed record with a stunning 319 terabits per second. That’s double the previous record of 178 Tb/s set a year ago by engineers in Japan and the U.K.

The speed test was performed in a lab using advanced fiber optic technology. Many fiber optic cables contain one core and a lot of cladding, or covering, to protect the data inside. NICT’s system used an experimental strand of fiber optic cable with four cores housed in a cable roughly the size of a standard fiber optic line.

To continue reading this Vice report, go to:
https://www.vice.com/en/article/bvz5kd/japan-transfers-319-terabits-per-second-setting-internet-speed-record

Data transmission speed record clocks blistering 319 Terabits per second
The world record for fastest internet speed has been utterly shattered as Japanese engineers have demonstrated a data transmission rate of 319 Terabits per second (Tb/s) through optical fibers. The record was set over more than 3,000 km (1,864 miles) of fibers, and is apparently compatible with existing cable infrastructure.

It’s hard to overstate just how incredibly fast that transmission speed is. It’s almost twice the previous record of 178 Tb/s, set less than a year ago, and seven times faster than the record before that – 44.2 Tb/s from an experimental photonic chip. NASA gets by with “only” 400 Gb/s, and it absolutely demolishes speeds currently available to consumers: the fastest home internet connections top out at 10 Gb/s in parts of Japan, New Zealand and the US.
https://newatlas.com/telecommunications/data-transmission-speed-record-319-terabits-second/

Researchers at Japan’s National Institute of Information and Communications Technology (NICT) in Tokyo have almost doubled the previous long-haul data transmission speed record of 172 Tb/s established by NICT and others in April 2020. The researchers recently presented their results at the International Conference on Optical Fiber Communications.

In breaking the record, they used a variety of technologies and techniques still to become mainstream: special low-loss 4-core spatial division multiplexing (SDM) fiber employed in research projects, erbium and thulium doped-fiber amplifiers, distributed Raman amplification, and, in addition to utilizing the C-band and L-band transmission wavelengths, they used the S-band wavelength. Until now, S-band usage has been limited to lab tests conducted over just a few tens of kilometers in research projects. But perhaps of most significance is the claimed high transmission quality in the 4-core fiber that maintains the same outer diameter—0.125 mm—of glass cladding used in standard single-mode fiber.
https://spectrum.ieee.org/world-record-data-transmission-speed-smashed

Researchers from the National Institute of Information and Communications Technology (NICT, President: TOKUDA Hideyuki, Ph.D.), Network Research Institute, succeeded the first S, C and L-bands transmission over long-haul distances in a 4-core optical fiber with standard outer diameter (0.125 mm). The researchers, lead by Benjamin J. Puttnam, constructed a transmission system that makes full use of wavelength division multiplexing technology by combining different amplifier technologies, to achieve a transmission demonstration with date-rate of 319 terabits per second, over a distance of 3,001 km. Using a common comparison metric of optical fiber transmission the data-rate and distance produce of 957 petabits per second x km, is a world record for optical fibers with standard outer diameter. In this demonstration, in addition to the C and L-bands, typically used for high-data-rate, long-haul transmission, we utilize the transmission bandwidth of the S-band, which has not yet been used for further than signle span transmission. The combined >120nm transmission bandwidth allowed 552 wavelength-division multiplexed channels by adopting 2 kinds of doped-fiber amplifier together with distributed Raman amplification, to enable recirculating transmission of the wideband signal. The standard cladding diameter, 4-core optical fiber can be cabled with existing equipment, and it is hoped that such fibers can enable practical high data-rate transmission in the near-term, contributing to the realization of the backbone communications system, necessary for the spread of new communication services Beyond 5G. The results of this experiment were accepted as a post-deadline paper presentation at the International Conference on Optical Fiber Communications (OFC 2021).

Over the past decade, intensive research has been carried out worldwide to increase the data rates in optical transmission systems using space-division multiplexing as a means to meet the exponentially increasing demand for optical data transmission. More recently, interest in fibers with the same 125 µm cladding diameter as standard single-mode fibers has grown due to their compatibility with conventional cabling infrastructure and concerns over the mechanical reliability of larger fibers. Particularly with multi-core fibers (MCFs), reducing the cladding diameter limits the number of spatial channels, leading to increasing interest in combining such fibers with wider transmission bandwidths in order to meet the expected growth in transmission capacity expected in SDM fibers. Until now, NICT has built various transmission systems that make use of wavelength division multiplexing across the C and L-bands together with state-of-the-art modulation technology to explore high data-rate transmission in a range of new optical fibers. Recently, NICT and research groups around the world have begun to explore S-band transmission, leading to several new records for transmission capacity in optical fibers, but transmission distance has been limited to only a few tens of kilometers.

Fig. 1 Transmission demonstrations using 125 µm diameter fibers
[Click picture to enlarge] NICT has built a long-distance transmission system around a 4-core optical fiber with a standard cladding diameter to exploit wider transmission bandwidth of >120nm across S, C and L-bands. The system exploits wavelength division multiplexing (WDM) and a combination of optical amplification technology to enable long-haul transmission of 552 WDM channels from 1487.8 nm to 1608.33 nm. The system was used to measure achievable transmission throughput with each channel modulated with PDM-16QAM modulation at distances up to 3,001 km, where a data-rate of 319 terabits per second was achieved. This result may be compared to achievements in other SDM fibers and transmission regimes by calculating the product of transmission capacity and distance, often used as a comparison metric. The data-rate x distance product becomes 957 petabits per second x km, which is over 2.7 times larger than previous demonstrations in SDM fibers with standard outer diameter.   Long distance transmission, not previously demonstrated with S-band signals, was enabled by constructing a recirculating transmission loop experimental set-up that combined 2 kinds of rare-earth doped fiber amplifiers  with Raman amplification distributed along the transmission fiber itself. The 4-core MCF with standard cladding diameter is attractive for early adoption of SDM fibers in high-throughput, long-distance links, since it is compatible with conventional cable infrastructure and expected to have mechanical reliability comparable to single-mode fibers. Beyond 5G, an explosive increase from new data services is expected and it is therefore crucial to demonstrate how new fibers can meet this demand. Hence, it is hoped that this result will help the realization of new communication systems that can support new bandwidth hungry services. 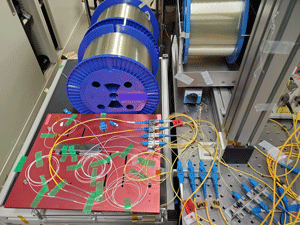 Fig. 2 Part of the transmission system this time (Raman amplification section) NICT will continue to develop wide-band, long-distance transmission systems and explore how to further increase transmission capacity of low-core-count multi-core fibers and other novel SDM fibers. Further, we will work to extend the transmission range to trans-oceanic distances.  The paper containing the results of this experiment was published at the International Conference on Optical Fiber Communication ((OFC2021, June 6 (Sun) to June 11 (Fri)), one of the largest international conferences related to optical fiber communication, this year held virtually due to Corona virus travel restrictions. It was highly evaluated and was presented in the Post Deadline session, known for release of latest important research achievements on June 11 (Fri) 2021 local time.

1.  Description of the novel transmission system

Fig. 8 Experimental results In the experimental system shown in Fig. 7, the data-rate of the system was determined by applying error correction coding on the transmitted bit-stream. The graph of the experimental results in Fig. 8 shows the data-rate (Throughput) after decoding, and although there are some variations, the average data rate per channel is around 145 gigabit per second for each core, and the average data-rate of combined spatial super-channel (4-cores) was over 580 gigabit per second. The data rate of 319 terabit per second was achieved across the 552 wavelength channels. 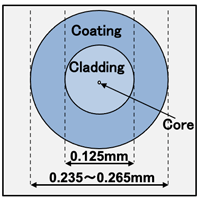 Wavelength band Various wavelength bands for optical fiber transmission are defined, distinguished by regions with different transmission characteristics arising from physical properties of the fiber. The C-band (wavelength 1,530 to 1,565 nm) and L-band (1,565 to 1,625 nm) are most commonly used for long-distance transmission, with O-band (1,260-1,360 nm), E-band (1,360-1,460 nm), S-band (1,460-1,530 nm), currently used only for short-range communications and U-band (1,625-1,675 nm) rarely used due to lack of suitable amplification. In this experiment we extended the range for long distance transmission to include the S-band, together with C and L-bands.

Fig. 4 Optical communication wavelength band Back to contentsAmplifier using rare earth-added fiber By adding a small amount of rare earth ions such as erbium (Er3+) and thulium (Tm3+) to the base material of an optical fiber, amplification can be acheived by exciting these ions with lower wavelength pump lasers and then amplifying signal photons through stimulated emission. Such amplifers have significantly increased the transmission range of optical fiber communication and allowed amplification of many wavelength channels simultaneously. Back to contents

Raman amplification Raman amplification is based on stimulated Raman scattering (SRS), when signal photons induce the inelastic scattering of a lower-wavelength ‘pump’ photon in a non-linear optical medium. As a result additional signal photons are produced, with the surplus energy resonantly passed to the vibrational states of molecules in the fiber core. This process, as with other stimulated emission processes, allows all-optical amplification in optical fibers with the gain depending on material of the fiber core. 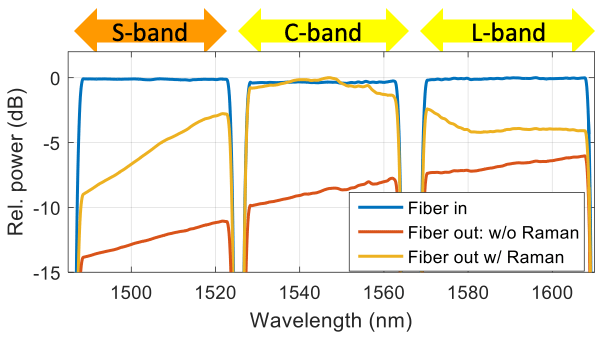 New optical fiber Currently, standard single-core single-mode fiber, which is widely used for medium- and long-distance communication, is considered to have a capacity limit of about 100 terabits per second in the conventional C- and L-bands and 200-300 terabits per second if adopting additional bands. In order to further increase transmission capacity, research on multi-core fibers with more cores (light paths) and multi-mode fibers has been performed extensively in recent years.

16QAM QAM is a multi-level modulation format with high spectral information density. 16 QAM uses 16 different signal symbols and can therefore encode 4 bits of information in each. The spectral density of 16 QAM is therefore 4 times higher than for simple modulation formats such as on-off keying. Modulation methods that can transmit 5 times (32QAM) and 6 times (64QAM) information of OOK can also be used, but 32QAM and 64QAM but make the system more vulnerable to signal distortions such as optical amplifier noise and are not suitable for long-distance transmission. 16QAM is considered to be a practical multi-level modulation methods because it can reach medium and long distances sufficiently while increasing the information density per symbol.