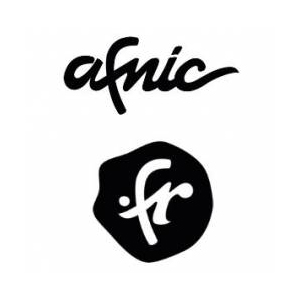 Almost two in five (39%) .fr domain names are registered by individuals as of the end of February 2013, and they are responsible for almost half (47.6%) of all new registrations, the latest French Domain Name Industry Report from the .fr registry AFNIC has found.

The number of domain names registered by individuals has almost doubled in the six years since a liberalisation of registration policies, when in January 2007 individuals were responsible for 20.7 percent of all .fr registrations.

The .fr namespace was liberalised in June 2006. The rules prior to then meant that individuals could only register domains at the second level in .nom.fr. 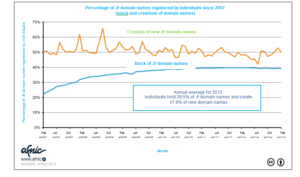 The report also surmises that individuals have a lower turnover in their portfolio of domain names at the end of the registration period, while firms are more likely to keep the domain names that serve as supports for their business and represent a strategic intangible asset in the same way as a trademark.

There has also been a slowdown in the growth of registrations for individuals, suggesting that there is becoming a saturation of the market for registrations by individuals, and possibly also influenced by economic conditions in France that may impact more on individuals than companies. Additionally, large firms may have registered new domain names more than individuals after the recent amendments to AFNICâs .fr registration policy where registrations were opened to Europeans in December 2011 and to IDNs between May and July 2012.

The report also found that the average number of domain names per holder for 2012 stood at 1.67 for individuals and 1.80 for corporations. These figures have been relatively stable over time, especially for individuals (with growth of only 0.01 percentage points in four years). Corporations, by contrast, have seen a gradual increase in their average number of domain names, and at a slightly higher level (0.08 points over four years). It would seem that individuals tend to register a .fr domain name and not create new ones thereafter, while companies may grow their portfolio of .fr domain names when launching new brands or products.

The French Domain Name Industry Report from AFNIC is available to download from www.afnic.fr/en/ressources/publications/french-domain-name-industry-report/online-edition/almost-40-of-fr-domain-names-are-held-by-private-individuals.html.