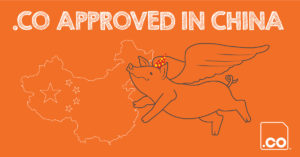 Chinaâs Ministry of Industry and Information Technology (MIIT) has approved .co for full commercial operations in the worldâs most populous country, meaning Chinese .co registrants can now host their domain names and websites on Chinese servers.

.CO is the ccTLD for Colombia, but since 2010 has been managed by .CO Internet S.A.S. in Bogota, Colombia, which today is a wholly-owned subsidiary of Neustar. It has been marketed as a generic top level domain (gTLD) and Google indexes .co sites as such.

Since launching for worldwide domain registrations in 2010, vast numbers of technology innovators and entrepreneurs have chosen .CO web addresses. Regularly identified with successful startups and world-famous brands, .COâs âhalo effectâ â a certain credibility granted to startup companies adopting .CO domains â is a powerful benefit that is already enjoyed by millions of brands, businesses and entrepreneurs, and will now be available to the Chinese market.

âThe final barrier our Chinese .CO domain owners have faced has now been overcome,â said Crystal Peterson, .CO Internet Director of Sales and Marketing. âDomain names ending in .CO are now fully approved in China along with Chinaâs own .CN top-level domain, and other well-known global domains, such as .com and .biz.â