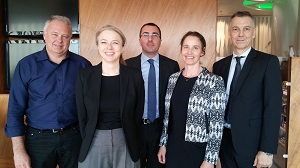 CENTR today (19/3) announced that its 53rd General Assembly has elected Giovanni Seppia (.eu) as Chair of the organisationâs Board of Directors, as well as Elisabeth Ekstrand (.se) and Danko JevtoviÄ (.rs/.Ð¡Ð Ð) as members of the Board. All terms are effective as of 19 March 2015.

âWe are honoured to welcome Giovanni as the new Chair of the Board, as well as Elisabeth and Danko as new members of the Boardâ said Peter Van Roste, General Manager of CENTR. âGiovanni is a dynamic leader with a distinguished record in the domain name industry. Elisabeth and Danko are also respected experts in their field. Their knowledge and experience will bring a fresh perspective to our organisation.â
Giovanni Seppia, External Relations manager at EURid, was first elected as member of the Board in February 2012. He has 15 years of experience in the country code top level domain industry. He was External Relations manager at the .it registry until 2004, has been CENTR General Manager, ICANN Liaison Manager for Europe and has joined EURid in 2007. He has three years of experience in various roles at the European Commission.
Elisabeth Ekstrand is Secretary of the .SE Board and Head of Legal and Policy. Previously, she worked in the telecommunication and internet sectors, and operated her own law firm before joining .SE in 2005.
Danko JevtoviÄ has been CEO of RNIDS (.rs/.Ð¡Ð Ð) since 2013. He has been involved in the reform of the former Yugoslav national registry since 2000. Danko has been an IT entrepreneur since the late 1980âs and he has co-founded the Jugodata and SezamPro companies.
CENTR extends a sincere thank you to the outgoing Board Chair Peter Vergote (.be) and Board member Anne-Marie Eklund LÃ¶winder (.se) for their dedication, time and efforts. CENTR further congratulates the newly elected Board Chair and member and wishes them great success in their new positions.
This CENTR news release was sourced from:
centr.org/news/board/03-19-2015/4038/centr-elects-new-chair-board-and-board-members