Slate: Citing security to silence dissent is always a bad look, but right now the side effects are especially cruel.

As COVID-19 spreads, the internet is center stage. It is the source of everything from rampant lies to crucial information, and it is the great connector that has allowed many people to work from their couches and stay in touch with loved ones while in isolation.

It’s not only individuals and businesses taking advantage of ubiquitous connection; many governments are turning to increased surveillance to monitor and contain the pandemic’s spread. Singapore has developed an opt-in app that uses Bluetooth to monitor close contact among users, while Russia is using facial recognition cameras to watch for quarantine violations. The United States government is in conversation with the private sector about tracking phone location data to better monitor and contain the virus’s spread. The European Data Protection Supervisor even called for a “pan-European model COVID-19 mobile application, coordinated at EU level,” which would aggregate data in harmony with existing EU privacy laws.

To read this article in full, see:
https://slate.com/technology/2020/04/pandemic-internet-shutdown-danger.html

Online enforcers are dragging in hundreds for questioning as an assault on online speech continues. They are a sign how Beijing has given censors a more punitive role.

As China tries to reshape the narrative of its fumbled response to the coronavirus outbreak, it is turning to a new breed of police that carry out real-world reprisals for digital misdeeds.

The internet police, as they are known here, have gained power as the Communist Party has worked to seize greater control over the thoughts, words, and even memories of China’s 800 million web users. Now, they are emerging as a bulwark against the groundswell of anger over governance breakdowns that exacerbated the epidemic.
https://www.nytimes.com/2020/03/16/business/china-coronavirus-internet-police.html

Democracy and pluralism are under assault. Dictators are toiling to stamp out the last vestiges of domestic dissent and spread their harmful influence to new corners of the world. At the same time, many freely elected leaders are dramatically narrowing their concerns to a blinkered interpretation of the national interest. In fact, such leaders—including the chief executives of the United States and India, the world’s two largest democracies—are increasingly willing to break down institutional safeguards and disregard the rights of critics and minorities as they pursue their populist agendas.

As a result of these and other trends, Freedom House found that 2019 was the 14th consecutive year of decline in global freedom. The gap between setbacks and gains widened compared with 2018, as individuals in 64 countries experienced deterioration in their political rights and civil liberties while those in just 37 experienced improvements. The negative pattern affected all regime types, but the impact was most visible near the top and the bottom of the scale. More than half of the countries that were rated Free or Not Free in 2009 have suffered a net decline in the past decade.

Ethnic, religious, and other minority groups have borne the brunt of government abuses in both democracies and authoritarian states. The Indian government has taken its Hindu nationalist agenda to a new level with a succession of policies that abrogate the rights of different segments of its Muslim population, threatening the democratic future of a country long seen as a potential bulwark of freedom in Asia and the world. Attacks on the rights of immigrants continue in other democratic states, contributing to a permissive international environment for further violations. China pressed ahead with one of the world’s most extreme programs of ethnic and religious persecution, and increasingly applied techniques that were first tested on minorities to the general population, and even to foreign countries. The progression illustrated how violations of minority rights erode the institutional and conventional barriers that protect freedom for all individuals in a given society.

The unchecked brutality of autocratic regimes and the ethical decay of democratic powers are combining to make the world increasingly hostile to fresh demands for better governance. A striking number of new citizen protest movements have emerged over the past year, reflecting the inexhaustible and universal desire for fundamental rights. However, these movements have in many cases confronted deeply entrenched interests that are able to endure considerable pressure and are willing to use deadly force to maintain power. The protests of 2019 have so far failed to halt the overall slide in global freedom, and without greater support and solidarity from established democracies, they are more likely to succumb to authoritarian reprisals. 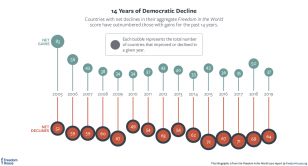 To read more than this introduction, go to:

On a stretch of Norway’s Arctic border known for its views of the Northern Lights is the small town of Kirkenes. Its population is under 4,000, and the local online newspaper has a staff of just two.

And it’s here that Russia is signaling what the future may hold: a wider reach in efforts to censor the Internet at home.

At issue is the Barents Observer, which publishes in English and Russian, and a story about an openly gay man who twice contemplated suicide but then changed his mind and is now speaking out to promote mental health. Russia’s state telecommunications regulator, Roskomnadzor, flagged the story for propagating suicide and blocked the entire Observer website in Russia last year.
https://www.washingtonpost.com/world/europe/the-kremlin-has-its-hands-in-the-internet-around-the-world-its-also-trying-to-control-cyberspace-at-home/2020/01/25/393101b2-3c64-11ea-afe2-090eb37b60b1_story.html
https://www.sfgate.com/news/article/The-Kremlin-has-its-hands-in-the-internet-around-15005509.php

Anh Chi is among the few social media-savvy activists, who are trying to push the boundaries of delivering news and analysis straight to the Vietnamese public. But these days, their voices are increasingly becoming muted due to government restrictions.
https://www.aljazeera.com/news/2020/01/vietnam-battalions-cyber-armies-silencing-online-dissent-200116235037858.html

India lost more than A$1.93 billion to internet restrictions in 2019 as Prime Minister Narendra Modi’s government pushed ahead with his party’s Hindu nationalist agenda, raising tensions and sparking nationwide protests.

The worst shutdown has been in Kashmir, where after intermittent closures in the first half of the year, the internet has been cut off since Aug. 5 following the government’s decision to revoke the special autonomous status of the country’s only Muslim majority state, a study said. The prolonged closure was criticized by India’s highest court, which ruled Friday that the “limitless” internet shutdown enforced by the government for the last five months was illegal and asked that it be reviewed.
https://www.bloomberg.com/news/articles/2020-01-13/india-lost-at-least-1-3-billion-to-internet-shutdowns-last-year

More than 18,000 hours of internet shutdowns around the world caused by deliberate government action cost more than $8 billion in 2019, a new report estimates.

India, Chad and Myanmar were the worst offenders in terms of the amount of time the internet was disrupted, while Iraq was the most economically affected, losing an estimated $2.3 billion across 263 hours of internet blackouts and social media shutdowns.
https://edition.cnn.com/2020/01/09/tech/internet-shutdowns-cost-intl-hnk/index.html

Kashmir blackout: India’s supreme court orders Delhi to review internet shutdown
India’s top court has ordered the government to review all restrictions, including suspension of internet service, in Indian-controlled Kashmir within a week, saying the indefinite suspension of people’s rights had amounted to an abuse of power.

The supreme court also directed the Indian government to make public all orders imposing a lockdown in Kashmir in August after the constitution’s Article 370 granting Kashmir special status was revoked, said the Vrinda Grover, a human rights lawyer.
https://www.theguardian.com/world/2020/jan/10/kashmir-blackout-indias-supreme-court-orders-delhi-to-review-internet-shutdown

Internet services have been disrupted in parts of Iran amid reports it is being cut off ahead of planned anti-government protests on Thursday.

Indian authorities have stepped up security in major cities and mobile data services were suspended in some places amid nationwide protests against a new citizenship law.

The administration of Uttar Pradesh, India's most populous state, banned mobile internet services in many parts of the state on Thursday night, including the provincial capital Lucknow, the state government said.
https://www.aljazeera.com/news/2019/12/internet-banned-india-uttar-pradesh-anger-killings-191227060434667.html

As protests over a controversial citizenship law rage across India, authorities resorted to shutting down the internet in cities where demonstrators flooded the streets. These are the latest shutdowns in a country which has seen the highest number of internet blocks in the world so far this year.

“I want to assure my brothers and sisters of Assam that they have nothing to worry after the passing of the Citizenship Amendment Bill. I want to assure them – no one can take away your rights, unique identity and beautiful culture. It will continue to flourish and grow,” Prime Minister Narendra Modi tweeted on 12 December amid violent protests in the north-eastern state last week.
https://www.bbc.com/news/world-asia-india-50819905