For someone in the tech industry you could have expected better. But as former Hewlett-Packard CEO Carly Fiorina announced that she’s running for the Republican nomination to become US President, it became apparent she’d forgotten to register the domain carlyfiorina.org.The domain was registered in December when it became apparent she was considering running, and someone has got in early. The registrant is now using the domain to showcase their claim she was responsible for around 30,000 retrenchments in her time at Hewlett-Packard.She is the second Republican to nominate for the Republican candidacy to have domain troubles as the New York Times reports. “Senator Ted Cruz, who failed to secure TedCruz.com. (Mr. Cruz’s troubles go back even further — after his filibuster intended to undercut the rollout of the Affordable Care Act, a website, TedCruzforAmerica.com, was registered and redirected unsuspecting users to the website of the federal health insurance exchange.)” 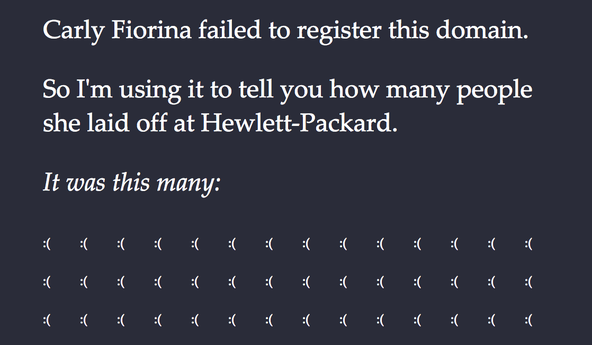 The Times also notes “some politicians (or potential politicians) have taken notice, most notably Chelsea Clinton, who as BuzzFeed reported, registered nearly every possible domain derivation of her name.”