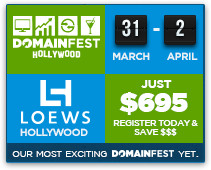 [news release] DomainSponsorÂ®, the online monetization business of Oversee.netÂ® and organizer of the critically acclaimed DOMAINFestÂ® series of conferences, announced that New York Times and Wall Street Journal best-selling author and social media expert Gary Vaynerchuk will be the opening keynoter at this yearâs DOMAINFest Hollywood, which will be held from March 31 to April 2, 2014 at the luxurious Loews Hollywood Hotel in Hollywood, California.Â

As a social media trailblazer, Vaynerchuk began video blogging in 2005 and now has nearly 1 million Twitter followers. He has been included on BusinessWeekâs list of the âTop 20 People Every Entrepreneur Should Follow.â Some of his best-known YouTube video clips include âGet Off Your Ass & Get Noticed,â Future of Social Media Marketing,â and âCare Immensely or Die!â

Vaynerchukâs first business book, Crush It! Why Now Is the Time to Cash in on Your Passion, hit the New York Times, Wall Street Journal and Associated Press Best-Sellers lists in its first weeks. His second New York Times bestseller, The Thank You Economy, details the effect of social media on business and has become required reading for business leaders around the world. Vaynerchukâs most recent book, Jab, Jab, Jab, Right Hook: How to Tell Your Story in a Noisy Social World, shares how to knock out the competition through the most effective social media strategies.

In 2009, Vaynerchuk and his brother launched VaynerMedia, a new breed of agency that helps Fortune 500 companies like General Electric and PepsiCo find their social media voices and build their digital brands.

Vaynerchuk has appeared on countless shows â from Jimmy Fallon, Late Night with Conan OâBrien and Ellen to MSNBC, CNBC, CNN and NPR.

Available now is a âlate birdâ registration fee of $795. Regular pre-conference registration is $995. This year, a special one-day pass will be available for the first day of the conference. Priced at just $295, it encourages a broad range of participants involved in the Southern California technology scene.Â  To register, visit http://domainfest.com.

Get the Latest News and Stay Informed

The DOMAINfest team will provide updates, information and much more via its Twitter handleÂ  @domainfest.Â  DOMAINfest, DomainSponsor and conference attendees will be tweeting before and during the conference using Twitter hashtag #DomainFest.Â  Videos, pictures, commentary and live news and information will flow on Twitter via hashtag #domainfest. Tweet us using hashtag #DomainFest.

This Oversee news release was sourced from:
oversee.net/news/517